Early exit for Renger and WTR at Daytona

After putting nary a wheel off the 3.56-mile, 12-turn Daytona (Fla.) International Speedway road course at the previous five IMSA WeatherTech SportsCar Championship season openers, logging respective race-day finishes of second, second, third, second and first and leading just short of 1,000 laps along the way, the team retired just past the two-thirds mark of this weekend’s 24-hour event after a mysterious issue led to right-rear tires going down on the high-speed superspeedway circuit no fewer than five times with damaging consequences on two of those occasions. 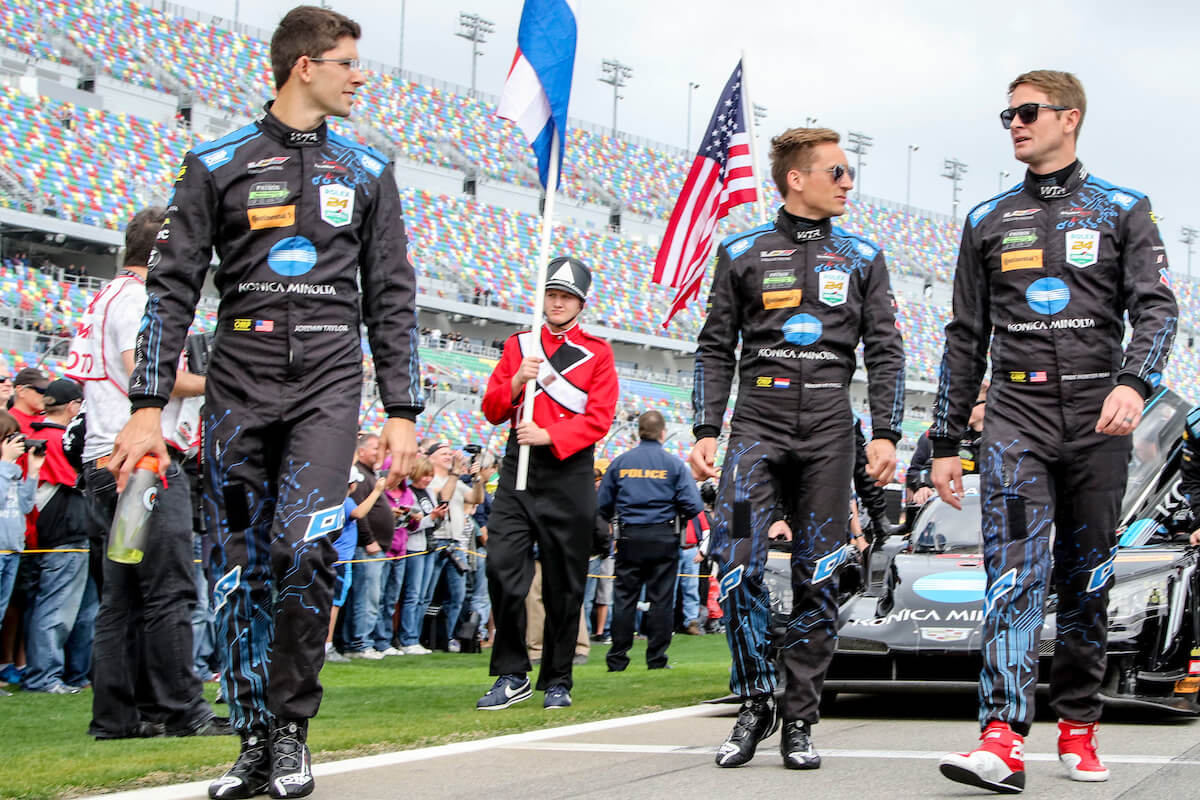 The team’s fifth and final tire puncture occurred at the 16-hour, 40-minute mark and, for the second time in the race, resulted in heavy right-rear body component damage inflicted by flopping tire tread as van der Zande tried to carefully limp the sleek, black Prototype-class entry back to pit lane from the farthest reaches of the massive circuit. It was the second such trip back to the pit lane for van der Zande that inflicted heavy damage to the racecar, the first coming as the result of a tire gone down at the eight-hour, 33-minute mark. Team and Cadillac officials collectively agreed to retire the car in the interests of safety.

“Based on the issues we had throughout the night and the early morning part of the race, and multiple ways of trying to fix it with no positive results, we had to retire the car with nothing to gain by keeping the drivers and the car out there while we had everything to lose,” team manager Travis Houge said.

Before the baffling series of incidents began just short of the five-hour mark Saturday, it looked to be very much business as usual for the No. 10 Konica Minolta Cadillac DPi-V.R team. A successful defense of last year’s Rolex 24 win appeared to be a distinct possibility, especially after team newcomer van der Zande earned the pole position in a thrilling qualifying session Thursday.

Van der Zande got off to a clean race start Saturday afternoon and comfortably led the opening 18 laps before the opening round of scheduled pit stops. From there, he, Hunter-Reay and Taylor easily maintained the team’s position in the top-five over the first four hours and 50 minutes. It was then that Taylor radioed that he suspected a right-rear tire going down while navigating the “bus stop” portion of the backstraight. He was able to safely return to pit lane, received a fresh set of tires, and resumed in eighth place.

Three hours later, at the seven-hour, 27-minute mark, van der Zande had his first of four tires go down. Like Taylor’s incident, he was able to make it to pit lane without incident and was able to resume just outside the top-five. But, an hour later, van der Zande was not as fortunate as his right-rear tire went down violently as he was exiting the infield portion of the road circuit. He limped the car back to the pit lane, from where the car then pushed to the garage. It took 12 minutes for the crew to repair the heavy damage inflicted by the flopping tire tread. Van der Zande resumed in 17th place, 10 laps down, with 15 hours of racing to go.

“I did three and a half stints,” the Dutch veteran driver said. “I got a flat tire into NASCAR (turn) four and I could just come into pit lane with no damage. During my last stint, double stinting the tires, I was at top speed on NASCAR two and got another flat tire. The tire started bouncing and slamming the side of the car and it hurt the radiator and we had to come to the garage and repair it. We had only one yellow to that point in nine hours of racing, so we knew it was going to be tough to make up the laps we lost.”

Things appeared to settle down for the team over the next seven hours as van der Zande, Hunter-Reay and Taylor were able to cycle through their stints without incident. And, with help from attrition, they were able to work their way into the top-five shortly before sunrise and made up several of the lost laps.

At the 15-hour, 27-minute mark, van der Zande experienced his third right-rear tire going down, this time just two laps after taking on a fresh set during a fuel-and-tire stop. He again was in position to dive into the pits, replace the tire and resume without major incident in sixth place.

But then came the fateful, final incident of the race for the team at the 16-hour, 40-minute mark. It left the team with a 15th-place finish and a 19-point deficit in the Prototype-class standings to the race-winning No. 5 Action Express Racing Cadillac DPi-V.R of Christian Fittipaldi, Joao Barbosa and Felipe Albuquerque.

“It turned out to be a rough ride,” van der Zande said. “I think I had four or five issues with the right rear tire, so something was happening where we were touching the curb or there was something on the road happening with the right-rear that wasn’t right. I guess we’ll be looking into that because that’s not good. It put us out of contention for the win early in the race and then it eventually forced us out of the race completely. It leaves us with a tough mountain to climb in the points, but if ever there was a team capable of climbing that mountain, it’s this one. On to Sebring we go.” 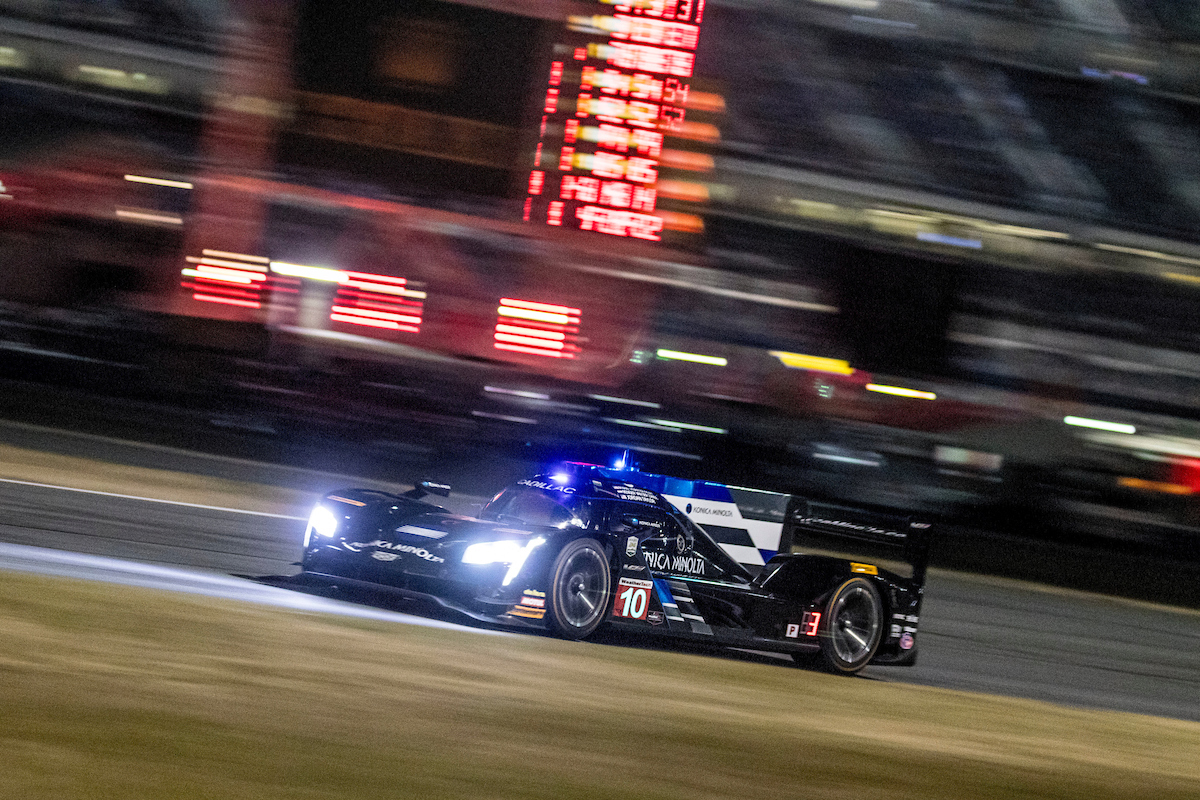 “It was out of our control,” Taylor added. “All of our guys did what they needed to. We did everything well within the parameters of what was recommended by everyone. We had a good car, there wasn’t anything different from last year, so there was no logical explanation for everything that happened. Drivers weren’t doing anything unusual, we weren’t hitting curbs in the ‘bus stop.’ To leave here with this much damage, that’s hundreds of thousands of dollars’ worth of damage which we obviously didn’t plan for and was happening out of our control. I think we can be angry and disappointed for good reason, but we’re also working with all the parties involved to find some good answers.”

Hunter-Reay was the only driver to not experience a tire going down during the event.

“It’s an unfortunate circumstance to retire from the race with such a strong car,” said Hunter-Reay, , the 2012 IndyCar Series champion and 2014 Indy 500 winner who will be back with the team for two of the three remaining endurance events at Sebring, Florida and Road Atlanta. “We obviously had the pace to be right there to be challenging the Action Express cars, but we had some unfortunate situations where we lost tires and we’ll look into it and get to the bottom of it to make sure we don’t have a recurrence of it in the future. But it was just an outstanding effort by this entire team to make sure all variables are within our control. Certainly, it would’ve been a very positive race result for this team, but such is life and that is racing and we’ll move onto the Twelve Hours of Sebring. I’m really looking forward to continuing with this team. I had a great time with this whole squad, especially Jordan and Renger.”

“Naturally, I’m upset for the team, for Cadillac, for Konica Minolta,” said team owner Wayne Taylor. “At least Cadillac had a 1-2 finish, even though we were not part of it. We went through a lot of equipment – three sets of bodywork and a lot of other parts and pieces – and most importantly didn’t see it worth the risk to our drivers and the other cars on track by continuing. Together with Max (Angelelli of Cadillac) and Mark Kent (of General Motors), it was agreed that it was the right decision to make. Thanks to everybody who supported us on this effort.”